Brantôme is a sumptuous flowery village to visit in the Périgord vert . Only 30 minutes from Périgueux, it is a delicious stroll, in the heart of what we call " The Venice of Périgord " , in reference to the river Dronne which surrounds it affectionately. Brantôme has a rich architectural and cultural heritage, like its Benedictine abbey which hides a strange troglodyte ensemble at the foot of a cliff with cavities engraved with a scene from the Last Judgment ... Brantôme is also very good restaurants , a generous weekly market and tourist activities , such as canoe trips, barges , hikes … Follow us to Brantôme, today I am accompanied by Les Promenades d'Alex , a guide who will escort us throughout the city!

The Dronne seen from one of Brantôme's 5 bridges

Brantôme, around its Benedictine abbey

We park our vehicle in the large car parks outside the city . Brantôme can be explored on foot or by bike, to be amazed by its beauties and allow yourself to spontaneously rush into one of its alleys ... Alexandre is a guide , today he accompanies me in the Venice of Périgord ( as Raymond Poincaré poetically named it in 1913) with enthusiasm and mischief: he resides there and appreciates the history and the tumult of this small village unlike any other. If you want to discover a village, nothing better than a guide to show you the details invisible to the naked eye of the simple visitor.

Arrival in Brantôme, on the left an old mill transformed into a restaurant, you can still see its paddle wheel crossing the bent bridge. On the right, one of the 3 old altarpieces, in the Jardin des moines.

Brantome is a land trodden by mankind for a long time, evidenced by the dolmen of the Pierre Levée, a monument classified megalith which is an ancient burial Neolithic. Nothing too surprising, did you know that the Dordogne is the 10th department that has the largest number of megaliths in France? They are numerous in Périgord Vert, in the nearby Périgord Limousin Natural Park .

The Jardin des Moines on the left, in front of the bridge and on the right behind the house are the remains of a quarry, because the building stone of the abbey is quite local!

In the 5th century, pagans and hermits arrived on the banks of the Dronne and spotted shelters under rocks , natural troglodyte shelters , where they went to settle. From this period, there are some curious bas-reliefs that can be admired when visiting the Troglodyte Route of the Abbey of Brantôme . One part represents an imposing and massive figure, who stands with indifference and has then presumably been integrated into a more structured and complex scene by the monks, to represent a scene from the Last Judgment , which then reminds us that we are all equal in the face of death and judgment of the Divine ...

La Grotte de Brantôme, the site was not open, you will have to visit it to see the bas reliefs yourself!

In the 8th century, Benedictine monks also established themselves, and they then set up the Abbey of Brantôme in this green and natural setting where all the raw materials and nourishing elements are at hand! They have the limestone cliff to protect them , the Dronne to water them and irrigate the crops that are installed on the fertile and silty soil . Charlemagne came to deposit there in 769 the relics of Saint-Sicaire (a child martyr) and he consecrated the building . The abbey will be razed twice by the Vikings around the 9th century… It will then pass (and the city with it) many times into the hands of the English , then the French , in a game of power and governance. But if today, we can appreciate Brantôme and the remains of its abbey in its almost original integrity, it is thanks to Abbé Pierre de Bourdeille (known as “ Brantôme ”!), Commendatory of the city in the 16th century , writer, courtier and soldier. It was he who opened the gates of the city to Admiral Coligny and Henri de Navarre , who left to plunder everything: they were so well received that they held the city, its abbey and its occupants in high esteem. From this beautiful religious ensemble, you can today admire the small cloister, the church and the buildings of the monks who are now the Town Hall and the Fernand Desmoulin Museum (painter and illustrator of novels at the beginning of the 20th century, who produced his works, inspired by spiritual experiences).

The majestic Brantôme abbey, with the Dronne at its feet. It's Friday, the market is in the city.

The Gardens, the 12th century Tour Saint-Roch and the Medici fountain (on the left)

In the background, the Saint-Pierre Church and its 4-storey Romanesque bell tower, which is the oldest in France, dating from the 11th century. Built on the rock 12 meters high. In front, the troglodyte shelters

Brantôme, a visit connected to the past

Brantôme is surrounded by the waves . The historic and medieval old town is surrounded by canals . Why and how? Fortunately, my guide Les Promenade d'Alex is there to explain to me all the ingenuity of the Benedictine monks, them who had once mastered this element to accomplish great things, like here in Brantôme, which is now surrounded by water and accessible thanks to 5 bridges . The canals also make it possible to bring water to the heart of the city, near the abbey to promote trade (and therefore the levying of a tax which enriches the city) and the passage of barges at the time. Today, the Dronne is one of the least polluted rivers in France and to cross it, go canoeing or take a trip in a barge with the Croisières de Brantôme in summer!

The elbow bridge over the Dronne

Stroll through the alleys to see hidden treasures, like this magnificent spiral staircase, or this tiny door (hidden on the left). No people weren't smaller in the Middle Ages, but the road was lower!

A former civilian and military hospital

Brantôme is one of the most beautiful villages to visit in the Dordogne , its heritage is exceptional. Narrow streets , beautiful local freestone houses, private gardens separated by canals. Inside the city, we alternate between vestiges of the Middle Ages and the Renaissance . If you don't have a guide with you, explore the city thanks to the explanatory panels placed all over the place.

We wish you a pleasant visit to Brantôme. If you want to take advantage of the weekly market , come on Friday !

Quickly organize your visit with Alex, by going to the information sheet, to the Guide du Périgord

The Brantôme food and non-food market. Look up!

A facade with magnificent alleys

Stroll through all the small and large alleys of Brantôme!

In the heart of the green and fresh Dronne valley, discover Brantôme . The village is surrounded by the river that ...

The Benedictine abbey of Brantôme being abandoned since the French Revolution, it is by following the foot of the ...

19th century engraver painter , friend of Zola and Hugo, his complete work is staged in two rooms of the abbey. • ...

The Château de la Hierce is part of the magnificent heritage of Brantôme , on the banks of the Dronne, in ... 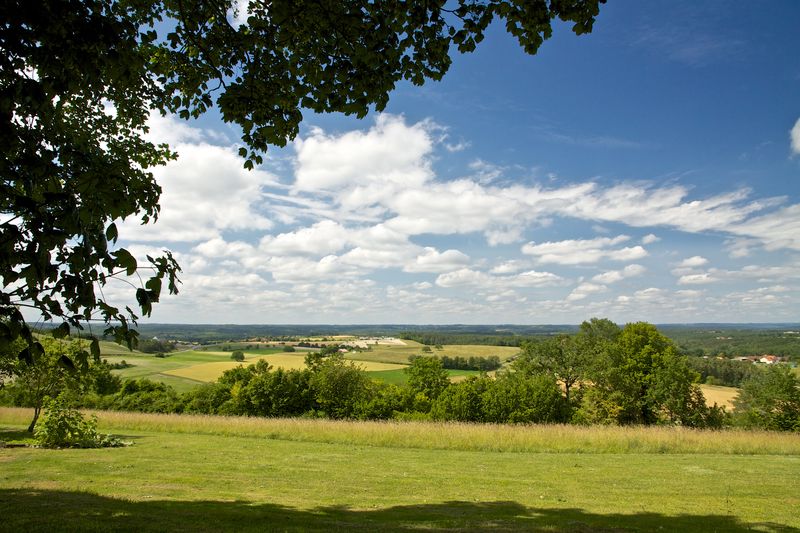