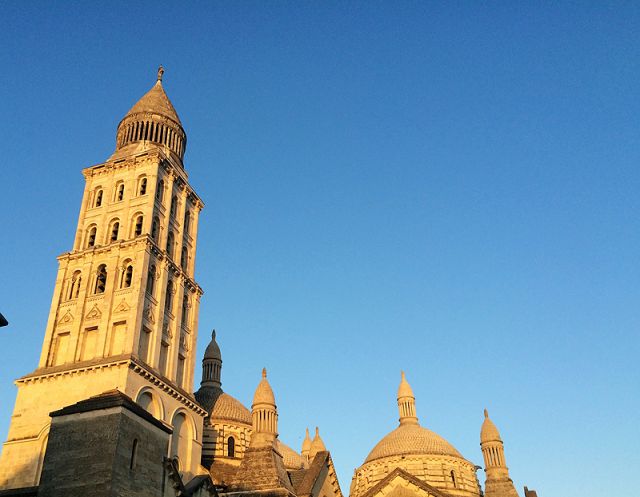 Périgueux is located at the centre of the Périgord and is a town with a rich historical past. Périgueux is situated in the Isle Valley and its history is reflected through its architecture.

Périgueux hosts the second largest museum of prehistory in France, “The Museum of Art and Archeology. The museum will guide you through a fascinating time traveling journey from the Stone Age to the Bronze Age. A large collection of tools and rare exhibits will tell you the epicstory of one of the Heros from the banks of the Isle river: the Chancelade man.

2,000 years ago, Périgueux was born from the union between the Gauls and the Roman invaders and was called “Vesunna”. A sumptuous and prosperous town, Vesunna had temples, public baths, a 20,000 seats ampitheatre, beautiful decorated villas with frescoes and mosaics. Numerous vestiges remain from this extraordinary period. The Vesunna tower, built by the Romans during the 1st century, is the most sacred part of a sanctuary built in the heart of this fabulous ancient town. The Arena’s Gardens, the Normandy Gate and the exclusive collections of the Vesunna museum

The tourist office will help you discover, during a well planned tour, The Vesunna Temple, the recently opened Gallo-Roman museum (Vesunna) at the heart of the ancient town (designed by the international architect Jean Nouvel) then the Roman street, the Castle Barriere, the Normandy Gate, the Gallo-Roman wall, the amphitheater and to finish, l’Église de la Cité, the only Cathedral of Périgueux UNTIL 1577. 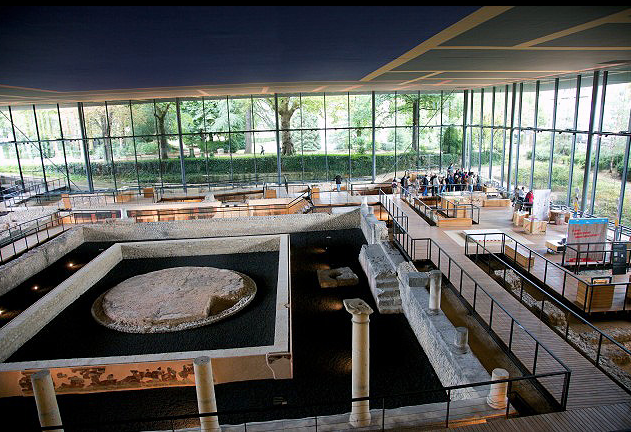 In what is today one of the most preserved areas of France, Lapeyre House, Estignard House, Logis Saint-Front, the Consul’s House, the Confectioner’s house…here and there, in Rue de la Sagesse, Rue de la Misericorde or Rue Limogeanne, are a reminder of the Renaissance period and the prosperity of the town. With perhaps, as an eternal signature of beauty and harmony, the salamander of Francois 1st on the tympanum of doors.

PERIGUEUX: THE TOWN AND ITS HISTORY 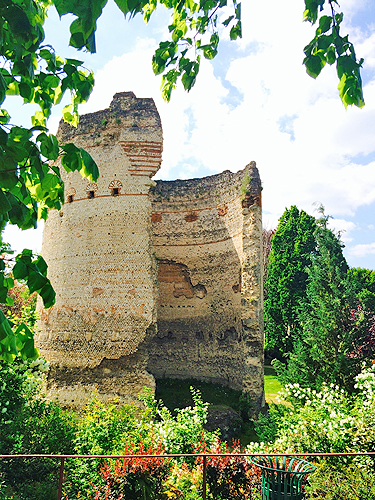 Discovering Périgueux is like turning the page of a history book. In the Museum of Art and Archeology, you will find a lot of prehistoric exhibits taking you back to the origins of mankind.

The town’s heritage will take you back to the zenith of the Roman Empire with its many vestiges of roman life and its Gallo-Roman Museum (Vesunna), which will make you appreciatethe treasures of the antique city of Vesunna.

Vesunna is a town that will surprise you with its prominent and majestic temple. Strolling down a medieval side street or from square to square, you will find half-timbered houses, beautiful residences with towers, which are the legacy of the rich merchants of Périgueux.

In this large historic quarter, the Saint Front Cathedral sits prominently at the hilltop. Thisinspired Byzantine edifice, which the Périgord inhabitants are proud of, displays a Greek crosswith coupoles. The various restorations over the years make it a very unusual building. Built onthe pilgrim’s route to St-Jacques de Compostelle  (Unesco World heritage since 1998), the Saint Front Cathedral is an important milestone for the pilgrims. During your journey trough the centuries, you will also discover beautifully decorated private homes dating from theRenaissance

The history book of Périgueux is not yet closed. The most recent town plan delivered long straight streets, wide boulevards with perfectly aligned facades: apartments with bay windowsand balconies… bringing a Parisian Boulevard atmosphere and letting you experience the Belle Epoque.

Périgueux, situated at the heart of Périgord is turned towards the future. Périgueux, which counts 30,000 inhabitants, is a dynamic, touristic and pleasant town to live with its busy and animated town center, training schools (2,000 students) and historic quarters. Périgueux counts also many green areas, which have been awarded 4 flowers by the “flourished town and villages competition”. 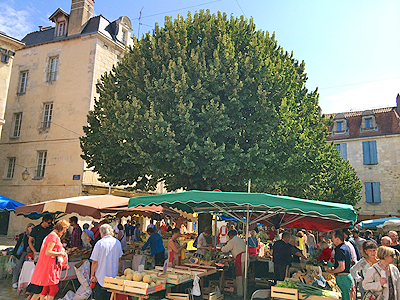 The know-how of the producers is a guaranty of quality for the local products.

Ariane’s good plan: Nothing like a good “Cabeou”, a “tourte” and few local fresh products in acountry setting picnic at the bottom of the Saint-Front cathedral. Read Auriane’s article.

ON THE MOVE IN PÉRIGUEUX

Around Perigueux, you will find more than 200km of mapping trails and paths accessible to all, allowing you to stroll in the forests, along the rivers and taking the time for a break in a picnic area.  Mapping trail sold at the Tourist Office. After a little walk, go down the river in canoe and enjoy a little escape to admire the Périgord’s heritage.  Fancy a few holes? Saltgourde golf is only 5 mn from the town centre and will welcome you in a quiet atmosphere, equipped with apractice range with various posts, a putting green, bar, restaurant…Great moments of pleasures and fresh air guaranteed!

HOW TO COME TO PÉRIGUEUX?

A WALK IN THE RENAISSANCE PÉRIGUEUX

La Tour Mataguerre (The Mataguerre Tower): Originally the town’s medieval wall was built with 28 towers and 11 gates, the Mataguerre tower is the last of the original towers.

L’Hôtel Lagrange:  Place de l'Hôtel de Ville; this fortified building dates from the 15th and 17th centuries, and was used during the “fronde” period.

The famous Place St Louis; once the location of the Périgueux fire brigade station, Place St Louis is now a charming square full of restaurants and terraces to chill out. You can also admire the 14th century  “maison du patissier”, which during the 19th century became the house of a famous baker who created the celebrated Périgueux paté.

Discover the geese and duck products market in Place St Louis from November to March.

Recently, the 19th century hall has been entirely renovated and Maison Lapeyre with its turrets in corbelled construction oversee the daily markets.

Place du marché au bois (Wood Market Square), is situated on the right handside of Rue Limogeanne. Few years ago, this square went through a complete renovation to its originalcharm. Like Place St Louis, it is full of restaurants and terraces where you can chill out whileadmiring the Haussman architecture.

La Place de la Vertu (access from Place du Marché and cross Rue Saint-Front) is another charming place in the old town dating back from the 19th century.

Then, go up via the little streets of Tourville and de la Nation where you will discover anexceptional residence: Le Logis St Front. Enter in the galleries to discover la Galerie Daumesnil via rue de la Miséricorde before coming back to rue Limogeanne and strolling backin the cathedral direction up to Place de la Clautre, ancient place of the executions which name reminds the “cloitre” of the Cathedral.

Thanks to a well-thought and modern urban plan, Périgueux can benefit in its town center of beautiful places and modern equipment.

Périgueux is a pleasant city to live:Cinema, Universities, the new place “Francheville”, the fabulous green way, where each week, hundreds of townsfolk looking for workouts and peace meet. There are also many green spaces; Parc Gamenson, The arena gardens (Jardin des Arenes), Vesunna Garden….

Just on the outskirts of the Gironde department, and the forests of “the Double”, Montpon is famous for its organ recitals What to visit: Churches and monasteries, local architecture. Curiosity: Pisciculture Estudor (visit, production and selling of caviar and fish) 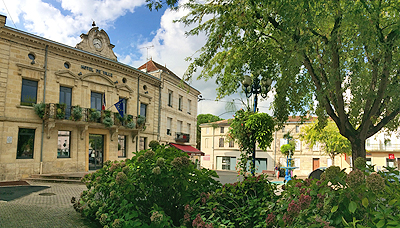 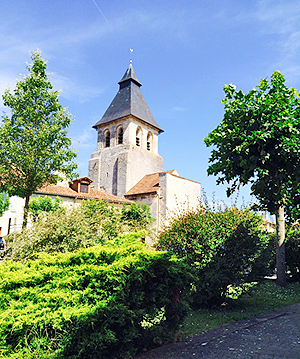 According to the expert opinion, Sorges truffe offers a perfume and reveals his unrivalled flavours.

Sorges dedicated his black diamond to the Ecomusée de la Truffe (Truffe Ecomuseum), created in 1982 and welcoming more than 10,000 visitors each year.

The Truffe market, which is taking place each year the last Sunday of January, attracts a big crowd and more and more international tourists. “Lauberge de la Truffe” which is listed “Logis de France”, is highly recommended (3 stars) and welcomes all year round international customers. Sorges also welcomes many delegations from European countries but also China, Russia…. 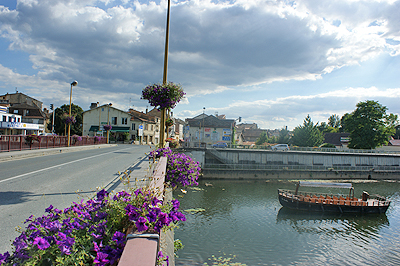 Bordered by the forests of “la Double” and “Landais”, Mussidan lies on the banks of the river “Isles”, about 35km from Périgueux.

What to see: 15th century church of Sourzac, Saint-Martin-l’Astier Roman church, and the Voulgre Museum of arts and crafts.

Vergt, located betweenPérigueux and Bergerac is well known as the strawberry