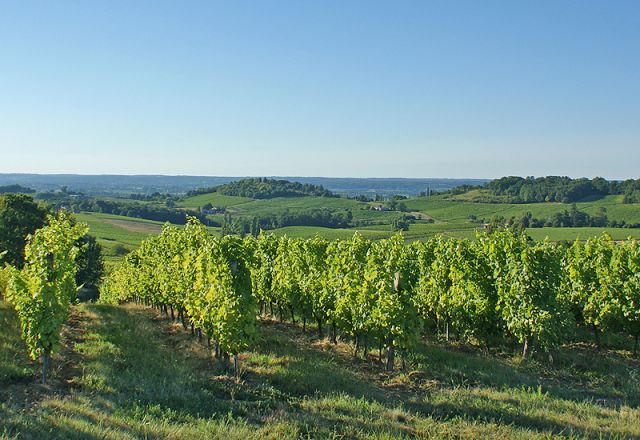 Country of Bergerac, bastides and vineyards.

It is by wandering the Dordogne valley that you will discover the Bergeracois, country of Bergerac, of bastides and of vineyards

By canoe or gabarre, discover the great diversity of the landscapes that stretch from one side to the other of the Dordogne River, its historic, natural and cultural heritage.

Ancient transportation route, the Dordogne has managed to develop itself economically and demographically. The boat heritage and paper mills are a legacy of the past economic life along the river and its tributaries. Paper mills, leisure fishing, waterway paddling are still today a sign of its attraction.

Bergeracois, which has long been envied, reveals a lot of bastides (nine are from English origins: Monpazier, Beaumont… and only one from French origin: Eymet). But also a lot of castles (Monbazillac, Lanquais, Montréal…) and typical villages as well as religious buildings of most importance such as the abbaye of Cadouin and Saint-Avit-Sénieur, listed UNESCO World Heritage.

With a mild and moderate climate, Bergeracois is a favourable place to the devlopement of vineyards. From the Montravel to Monbazillac, it is 13 quality AOC (label origin guaranteeing its quality) which tie perfectly with the gourmet products of our region (foie gras, trufles, geese and duck products). 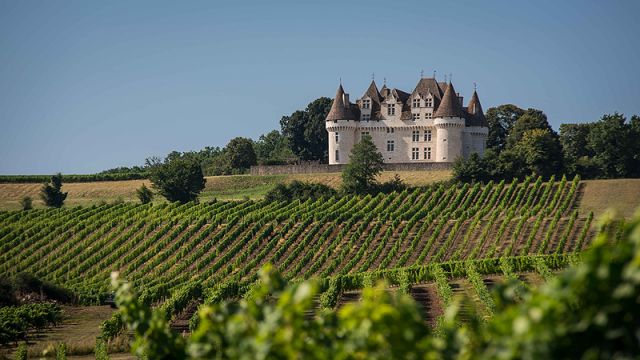 Finally, the Bergeracois offers high quality natural spaces. Many possibilities of hiking trails will allow you to discover our still preserved forests from the Landais to the Béssède and by canoe, the fabulous meandres of Trémolat and Limeuil. 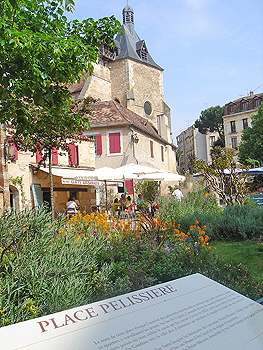 Bergerac, capital of the Purple Périgord, is situated at the heart of the Dordogne valley, and surrounded by prestigious vineyards (Monbazillac, Pécharmant). Bergerac will captivate you by its charm and mild climate.

The town itself was born really during the XI century with the castle situated on the edge of the river. It is all around the castle that the first inhabitations were built. Bergerac has two ports: (Parditte port and Cadouin port), where the “gabarres” (large wooden boat) bringing the products from up-stream, especially the wood and where the Bergerac wines were shipped to England and The Netherlands. During the Middle Ages, the town was prosperous and vibrant with a flourishing trade providing their resources.

The castle was destroyed as the centuries went past, (it was situated on the actual port, quai Salvette). The building in bricks and stones progressively replaced the fragile wooden houses. With the town developing outside its fortifications, the trade centre moved away. Slowly the river trade declined, as did all the port area populated mainly by craftsmen, fishermen and workers.

Today, “Vieux Bergerac" (Old town of Bergerac) is the pride of the inhabitants and a very popular place with tourists invading by thousands its small squares, streets and museums, admiring its restored wood panel and exposed stone houses.

Take advantage of your stay in Bergerac and enjoy a “Gabarre” trip on the Dordogne River. You will discover Bergerac in a different way, with view from the riverbanks and under bridges. Meeting point at the Bergerac’s pier. Information HERE

We did it for you, it is very pleasant!

Auriane’s tip: look at the lintels of the doors or above the windows, writing indicate sometimes the date of the places or if a famous person was born there. Read Ariane’s article.

Beaumont du Périgord is an English “Bastide” founded in 1272 by Lucas de Thaney, seneschal of Guyenne under King Edward 1st of England.

Built on the location of a more ancient town, Beaumont only kept few remains of its fortifications but still displays many houses with arches.

The 12th century church is surrounded by four powerful towers, which in case of attacks, was last the last defence of the town left to the English.

It is outside the city that you can admire the vestiges of the fortifications especially the fortified XIIIth century Luzier gate. 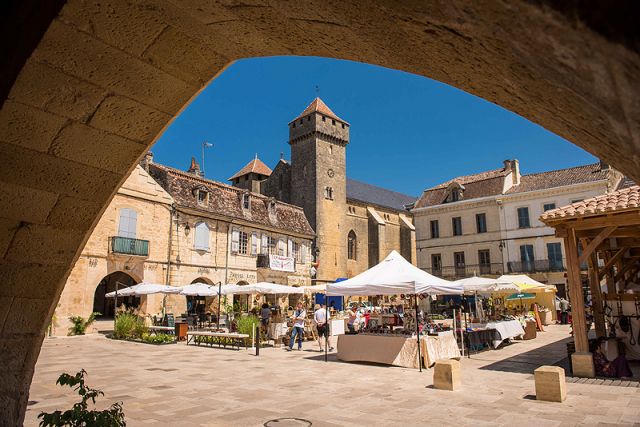 As early as the VIIth and VIIIth centuries, a large village must have existed (sepultures), a priory (attached to Moissac) was created at the end of the 11th century, protected overall by Castelnaud. 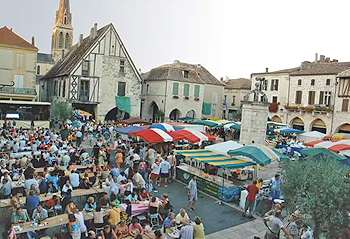 It was Alphonse de Poitiers, brother of Louis IX, who conferred a charter of foundation to the new town of Hayminete on 28th June 1270. It is under English domination that the bastide was built, more or less as it is today and fortified.

It is only during the 14th and the 15th centuries that the main square was covered.

After the “Hundred Years War”, the Reformed Church was instigated, which during the time of the revocation of the Edict of Nantes (granting the Huguenots substantial rights in a predominantly Catholic nation) resulted to a massive exodus of the region’s driving forces.

There was only a modest sacrifice to the new cult of the Revolution, which was marked principally by the presence of Lakanal and new exodus; life remained relatively peaceful until the two World Wars.

Auriane’s tip: The Game/trail-booklet for the children available at the Tourist Office. Ideal to discover the bastide while having fun! Read Auriane’s article. 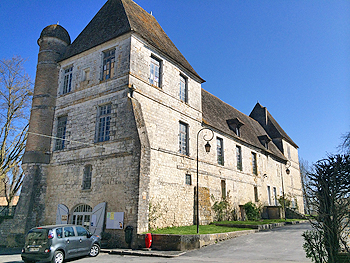 Issigeac, a little town situated South East of the Monbazillac vineyards, kept its originality with its narrow streets.

The 15th century church, built by Armand de Gontaut-Biron has a rare gothic style in Périgord. 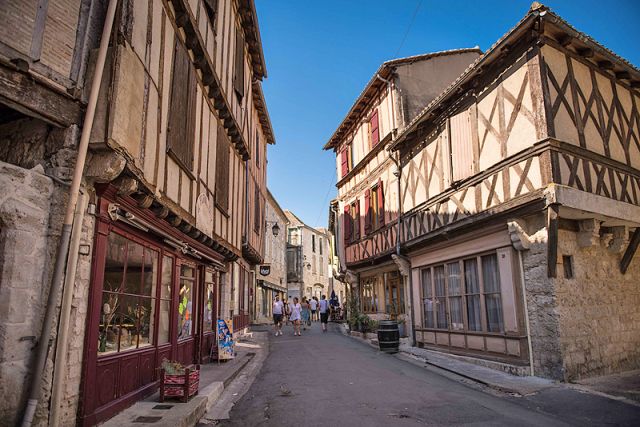 Auriane’s tip: During spring and summer, rue Sauveterre is one of the most flourished. To admire some atypical architecture, stop in front of the “mushroom” house. Read Auriane’s article. 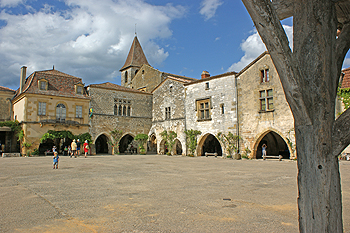 Monpazier is without a doubt the fortified town the most preserved in Périgord. Founded in 1284 by King Edward I of Englandand with the collaboration of Pierre de Gontaud, Seigneur de Biron,which also provided the grounds.

Monpazier was built to complete the defence lines already there with the foundations of the bastides of Lalinde, Beaumont, Molières and Roquépine, which purpose was to protect the road from the Agenais to the edges of the Dordogne River.

Discover 3 of the 6 ancient fortified gates, the typical houses, the quadrangle which old streets stretch from one side to the other in parallel to the large sides, crossed in their centre and forming like this perfect rectangular blocks.

Guided visits in July and August on Tuesdays and Fridays (Duration around 1h15mn). 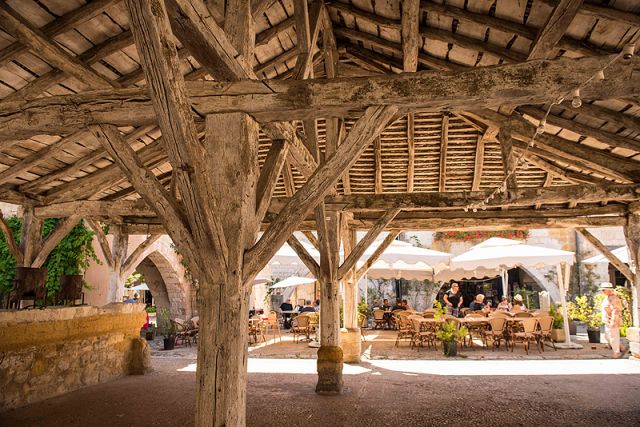 Auriane’s tip: try to find the “PAL”. This traditional medieval object acts as the central point of the bastide, namely the geometrical centre from which all the streets were built. Also of interest, “the Bastideum” (Museum on the bastide’s history) will complete the visit of the bastide. Read Auriane’s article. 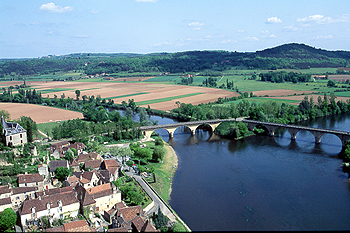 Listed in the “plus beaux villages de France” (The most beautiful villages in France), Limeuil ends well the beautiful “Vézère” valley, one of the one hundred places chosen by the UNESCO World Heritage centre.

Limeuil, with its fortunate location at the confluence of the Vézère and Dordogne Rivers, always attracted men.

As a Prehistoric site, its rocky terraces dominating the rivers, it was a place of defense.

As a medieval town, the town experienced the French and English influence during the One Hundred Years’ War.  During centuries, the canal transport was active and the heavy “gabarres” (traditional boat transporting merchandise) used Limeuil as a port and “a safe harbour”. 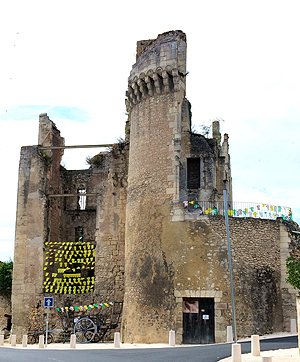 Villamblard is situated at the heart of the Périgord between Périgueux and Bergerac. Discovering Villamblard is like opening a 2000 years old history book. The first inhabitants are trace back from the prehistoric time. Roman tiles and potteries remains are the legacy of a Gallo-Roman habitat. Until the end of the 18th century, Villamblard will be an important town between Périgueux and Bergerac. Today, you are invited for a stroll in its sweet and blue past. 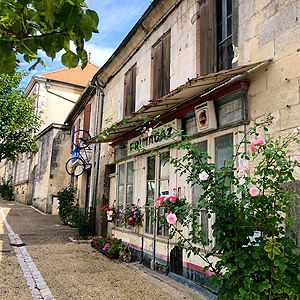 At the West entrance of the town, the Château Barrière offers important vestiges (12th to 17th centuries) and is opened to a public visit.

Villamblard is surrounded by a beautiful countryside, a landscape with valleys full of chestnuts forests and with some manors or castles like everywhere else in Périgord making the entire region magical.

Our favourite: The oldDistillerie Clovis Reymond, legacy of an ancient know-how for the fabrications of spirits and liqueurs...