The Battle of Castillon: Historic sound and light show a few steps from the Dordogne

Share The Battle of Castillon: Historic sound and light show a few steps from the Dordogne

Castillon-la-Bataille! A small town that reminds us of our distant history lessons, the end of the Hundred Years War. Bring this tumultuous period back to life, make it live and vibrate thanks to the grandiose spectacle of historical evocation all in sound and lights: The Battle of Castillon! Within cannon's reach of the very site of this historic epic, more than 30,000 spectators come every year to attend 15 performances a year, for everyone: families, young people, friends! The " Castillon 1453 " association and its 600 volunteers, actors, show engineers, scenographers, costume designers and directors are delighted to find an enthusiastic and amazed public. Beyond a show, it is a human adventure, an exchange, a sharing, around this historical subject made exciting and moving. Above all, remember to book to come and admire the riders, the peasants, the church people, the notables, on 3 hectares of stages with 200 extras every evening. From the bleachers, the show is breathtaking.

Photos of the article © Association Castillon 1453 and Pierre Planchenault

The show La Bataille de Castillon is above all a very beautiful story of friendship, encounters and the desire to share a convivial scenic moment. For 45 years , several associations have followed one another, which have in turn enriched the show, dared to innovate , shared desires and given birth to ideas that are sometimes extravagant but so exciting! Today, the "Castillon 1453 " Association, which has been producing the show since 2015, can count on the unwavering support of more than 600 volunteers. They come from Gironde but also from neighboring departments and sometimes from the other side of France. Each summer, 15 performances take place, 3 evenings a week, for 5 weeks. Doesn't that seem like much? It is a titanic task , a masterful enterprise to bring together and orchestrate the broom of these 1200 roles played by actors and volunteers. The stage, which is no less than 3 hectares, is embraced by 3000 spectators every evening. It is thanks to skilfully performed choreography, sound and lights that guide the attention of the amazed spectators throughout the evening, that the story unfolds like a life-size film! 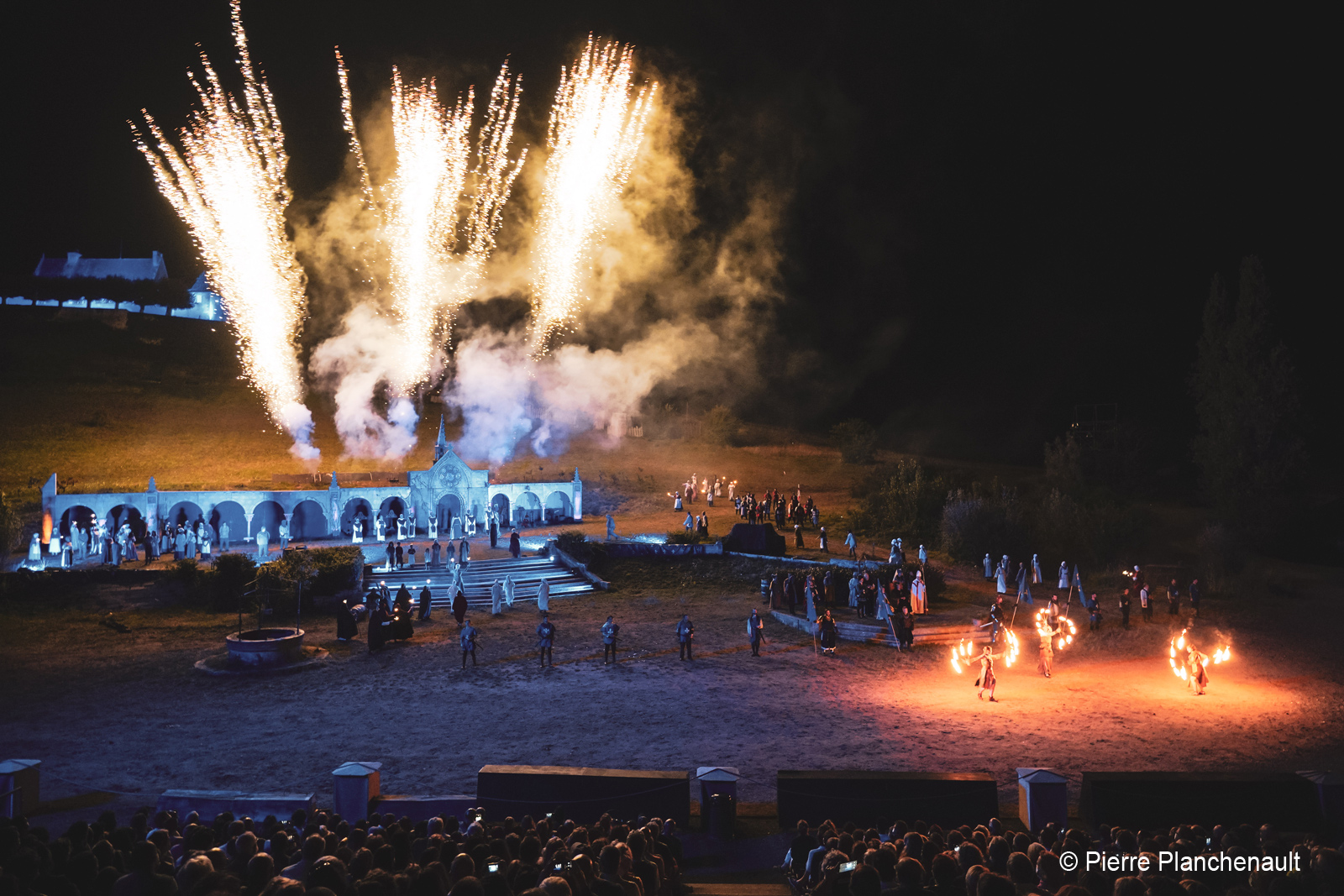 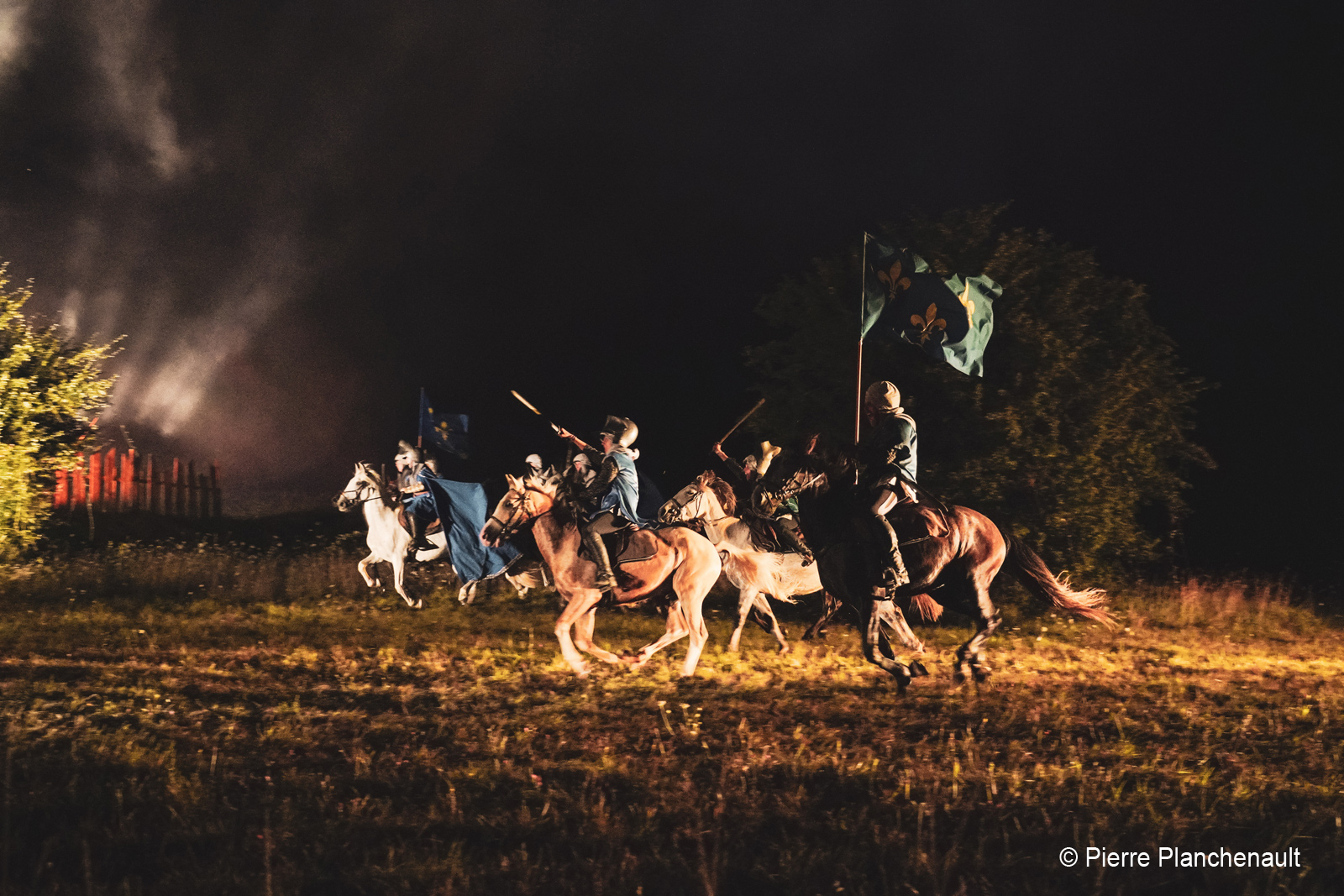 In 2022, the spectacle of La Bataille de Castillon will celebrate its millionth spectator, a real consecration for the whole team, a pride completely justified by the stars which shone in the eyes of all these spectators. Attending a performance, you immediately feel the osmosis between the protagonists. Their complicity transports us to historical facts , the subject is carried by the beauty of the costumes, the acting of the actors and the animals (horses, hens, donkeys and other animals of the lower court) who are also characters in their own right of the narrative. You never get bored, adults and children don't see the 1h35 show pass. 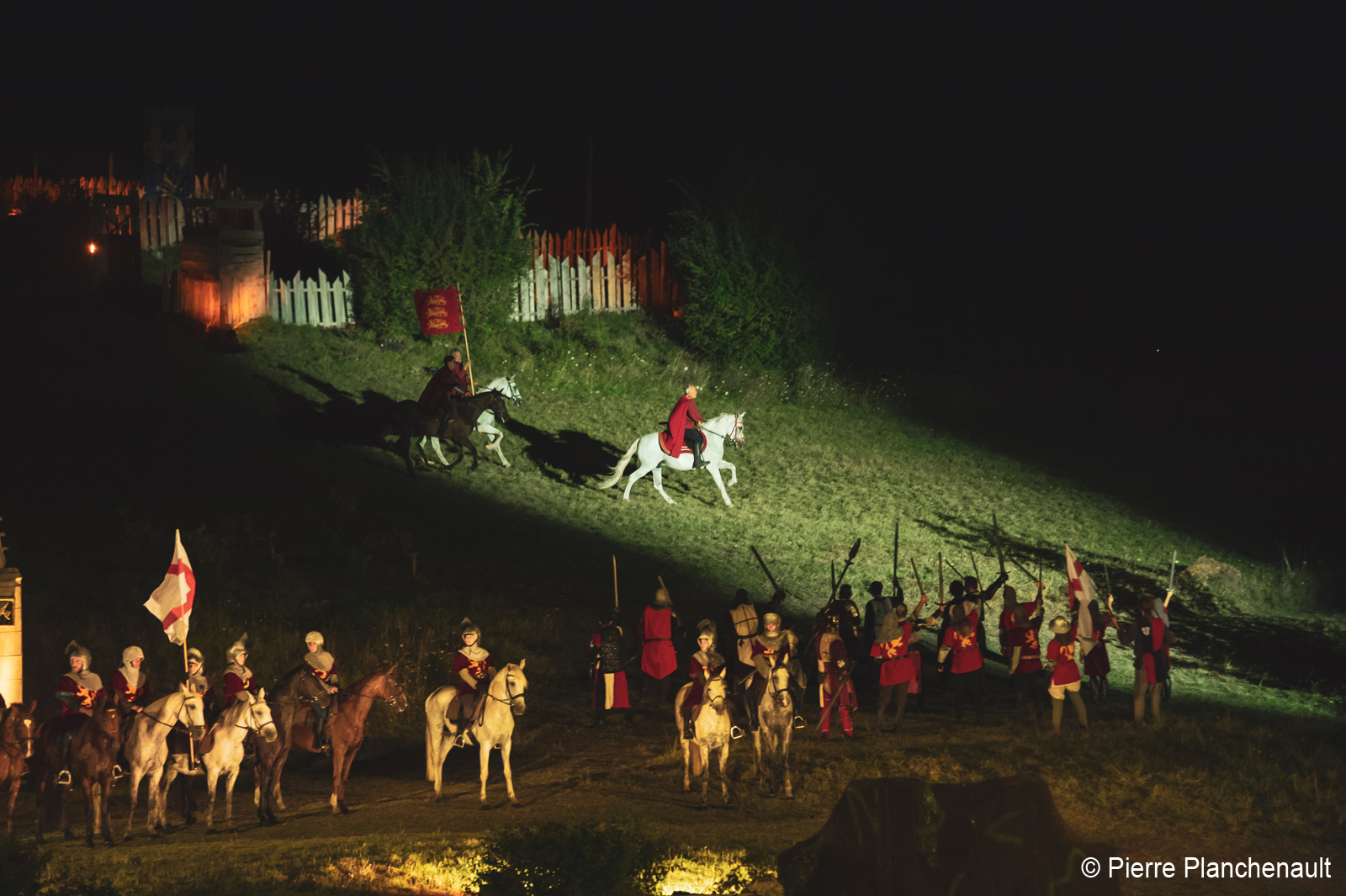 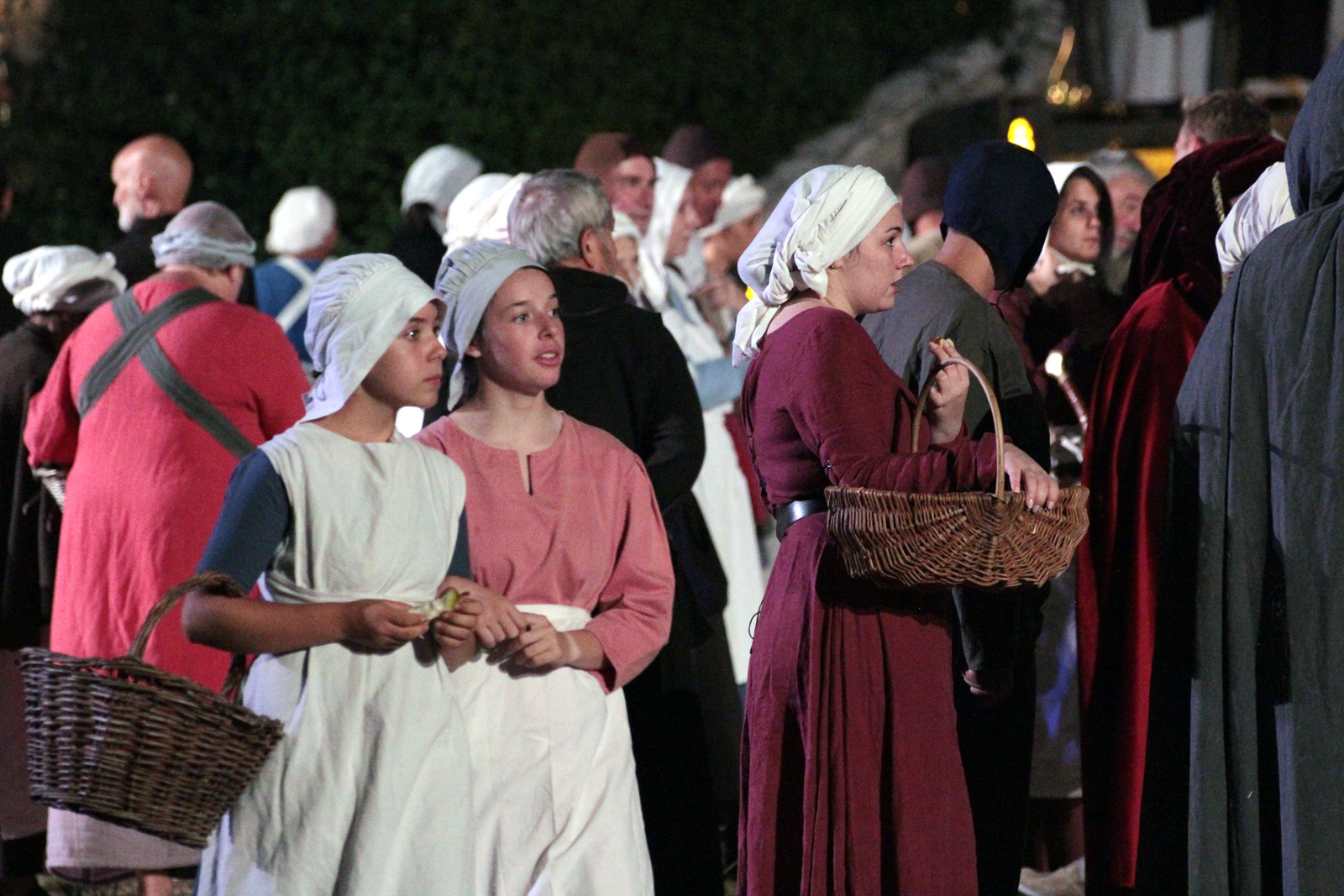 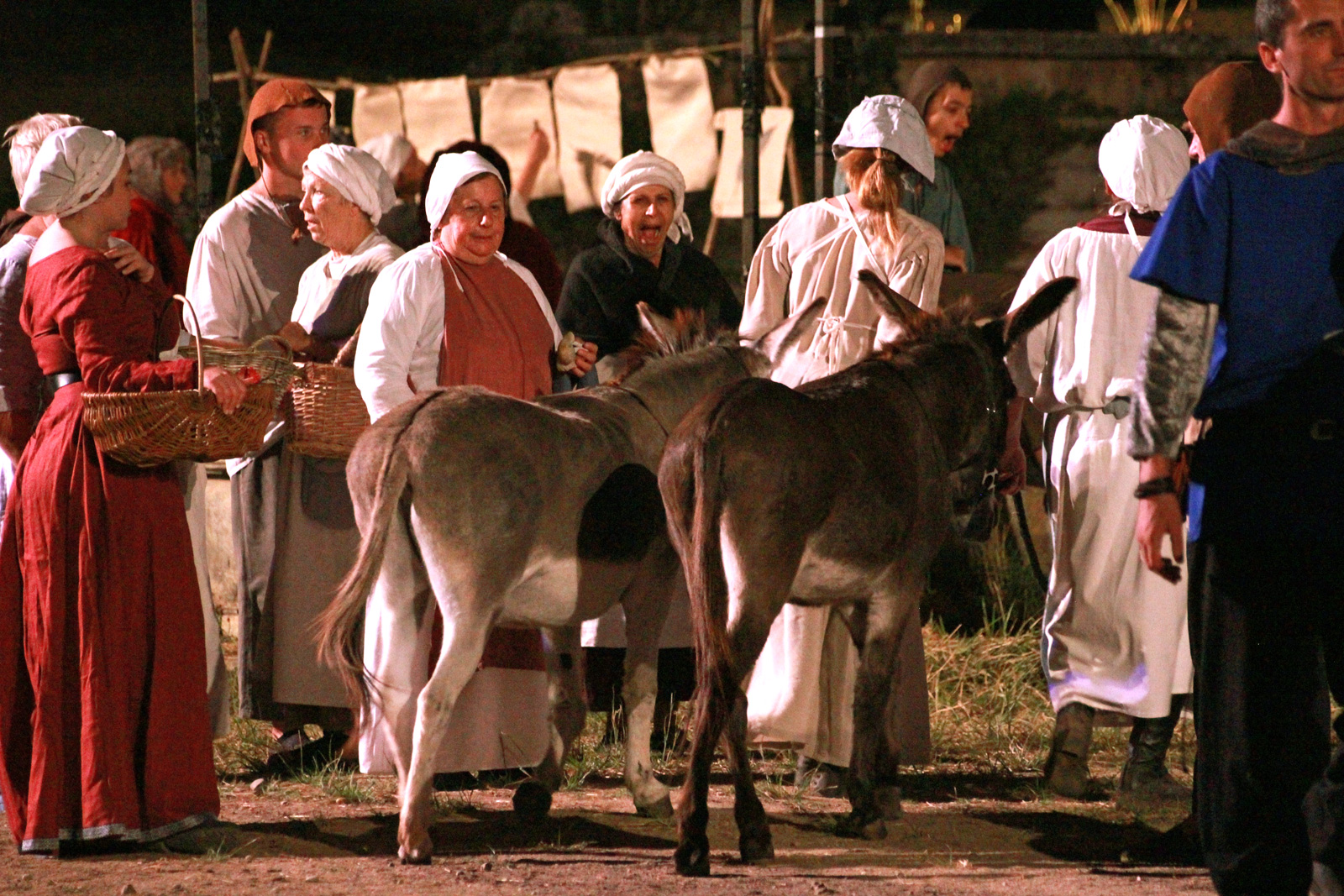 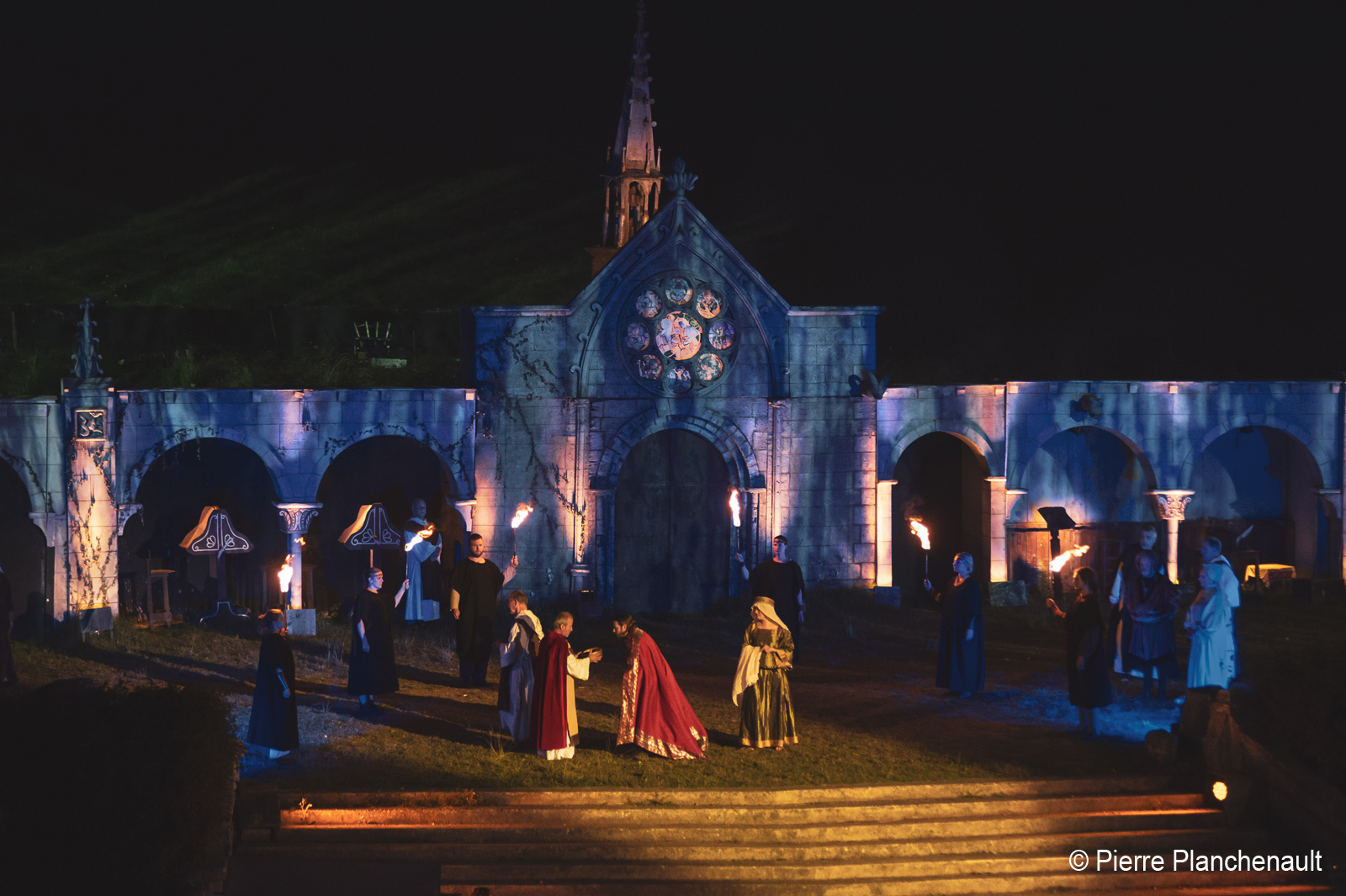 The medieval village of Castillon-la-Bataille

Before the show, which begins at 10:30 p.m., a medieval village stands at the foot of the castle, upstream from the stage area. This is a project that has existed for several years, but which has grown considerably after the COVID period. Today, you can walk there from 6:30 p.m. to 10:30 p.m., before the show. You can enter without attending the show, just to enjoy the atmosphere and dine for example. Small shows, quick skits, take place during the evening. Visitors are invited to dance , to participate in small workshops in the handling of weapons and crafts. Wooden games for the youngest, a Murder Party on medieval times, for addicts to this type of game... A backstage tour is also offered to see behind the scenes before the performance! ( to be booked).

The medieval village is open on show nights. It requires many volunteers to receive visitors and also prepare meals , as hundreds of hot and cold meals are served every evening! The on-site catering is varied, ranging from a hot meal at the Aliénor inn to snacking. The offer is diversified for all tastes and budgets! The great strength of the show and the adjacent village is its accessibility, the price is reasonable, even for a family, compared to the quality of the services! 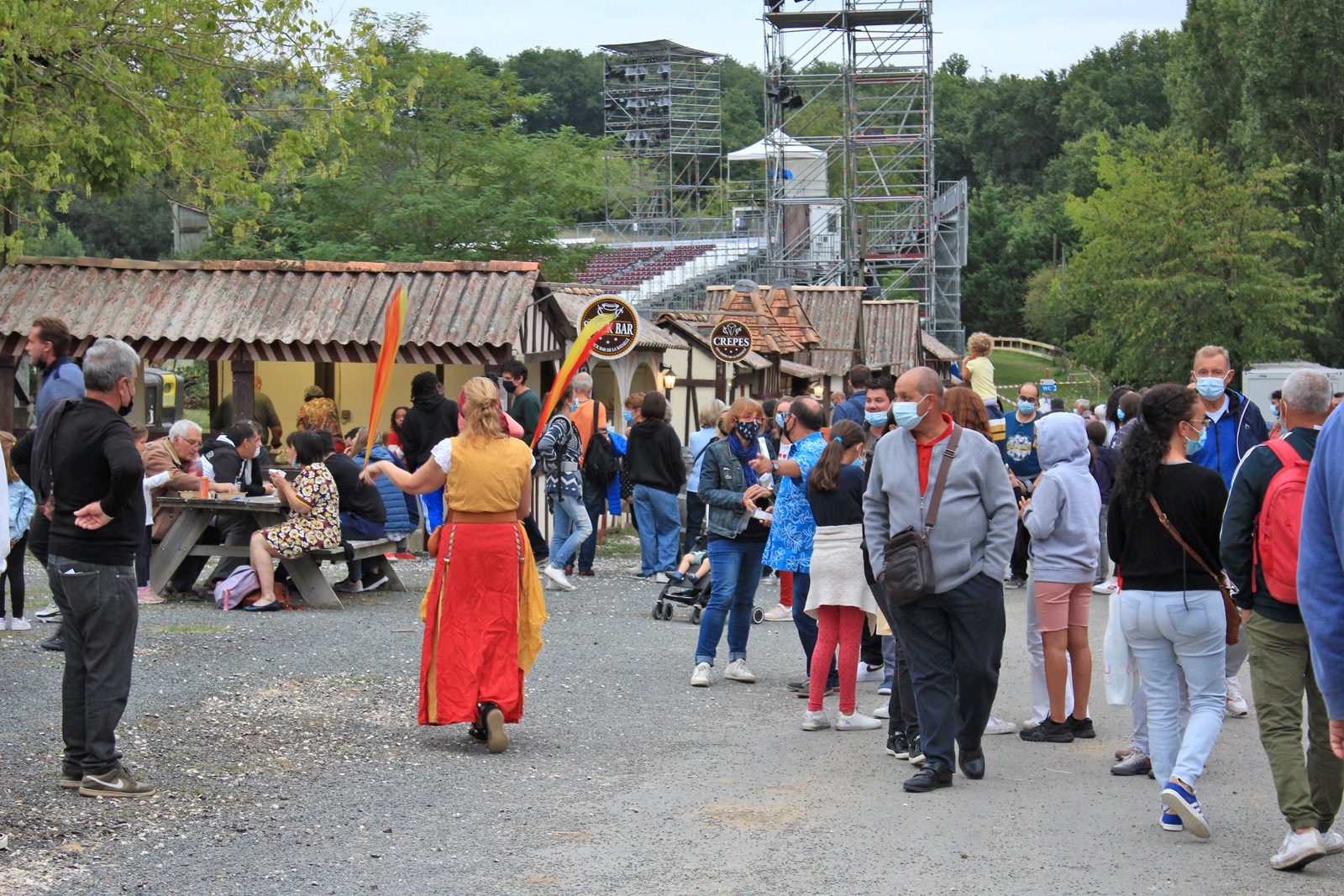 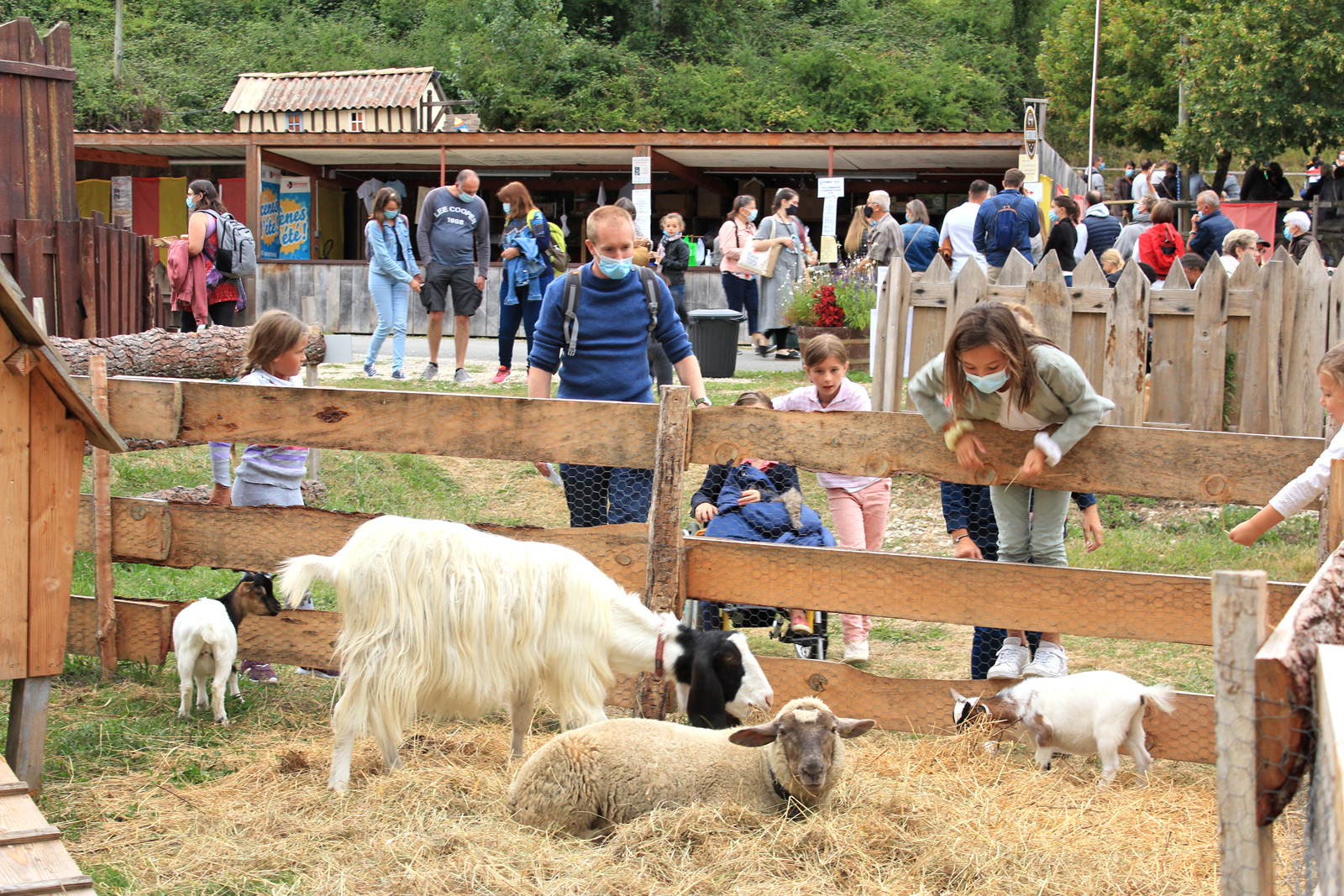 A show about the Battle of Castillon, the end of the Hundred Years War

You will have understood it, the show exposes the Battle of Castillon which took place right here, on this territory of Guyenne. It is not so much the battle (which is the high point of the show but not its only subject) that interests the director Eric Le Collen, it is the shift from one era to another that it represents. Through a multitude of small situations exposed on the 3 hectares of stage, we will share the life of the inhabitants, of all social and societal categories. It is a historical evocation of this territory, we will narrate a new world which is taking shape, which will slide gently towards the Renaissance to tip France into a more modern and ostentatious period. Alienor d'Aquitaine is an omniscient character, strong and whose presence illuminates the show... We won't tell you more... 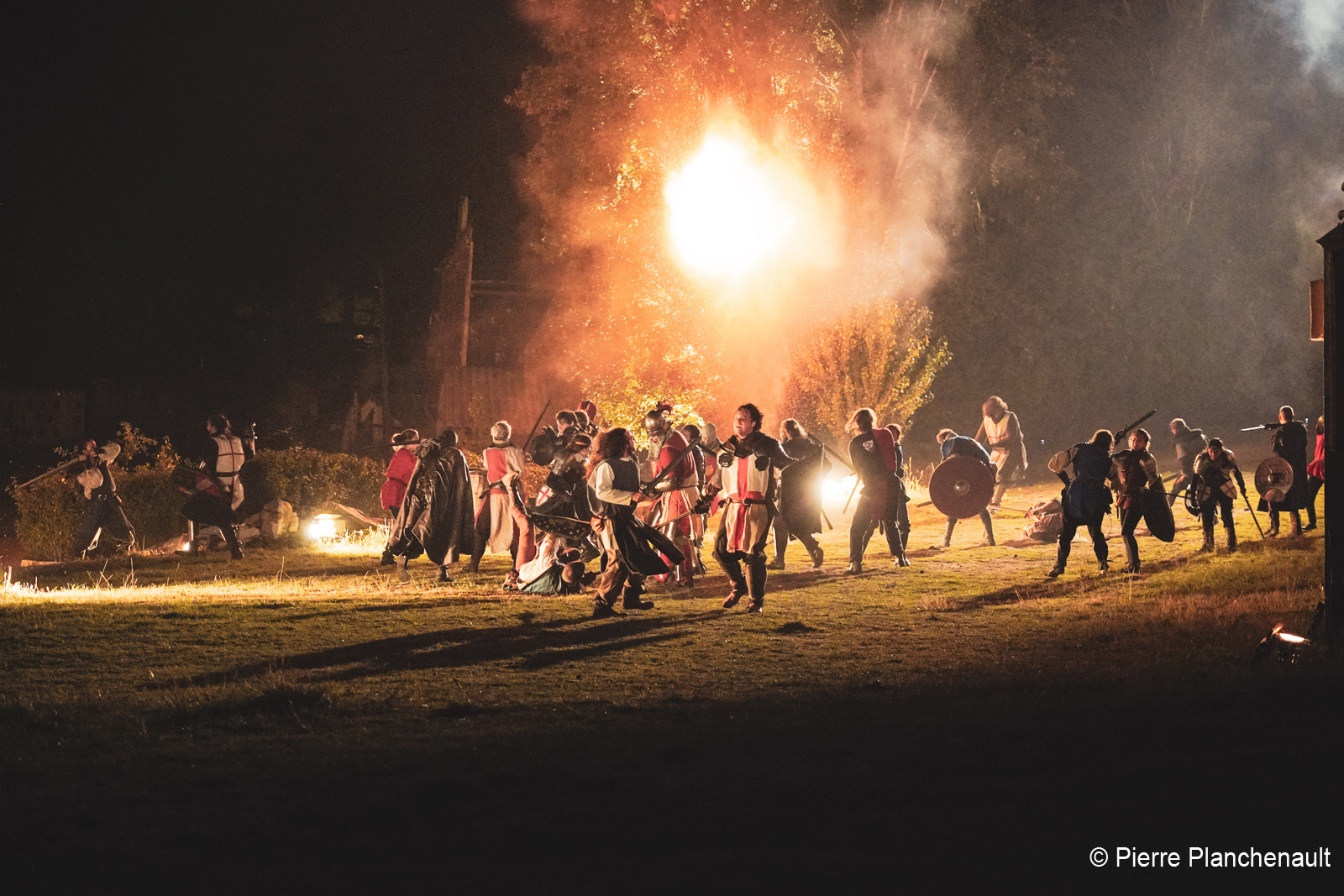 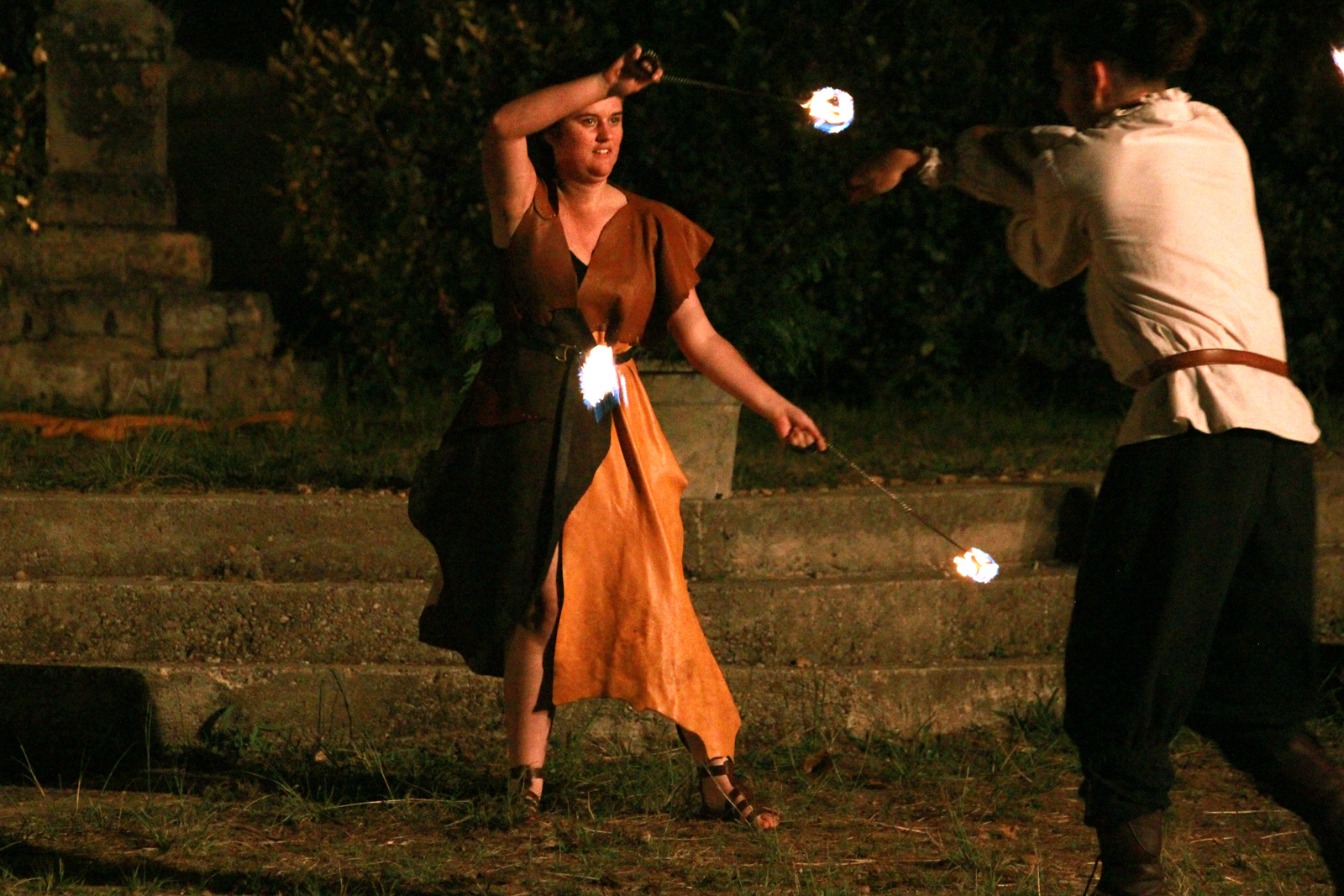 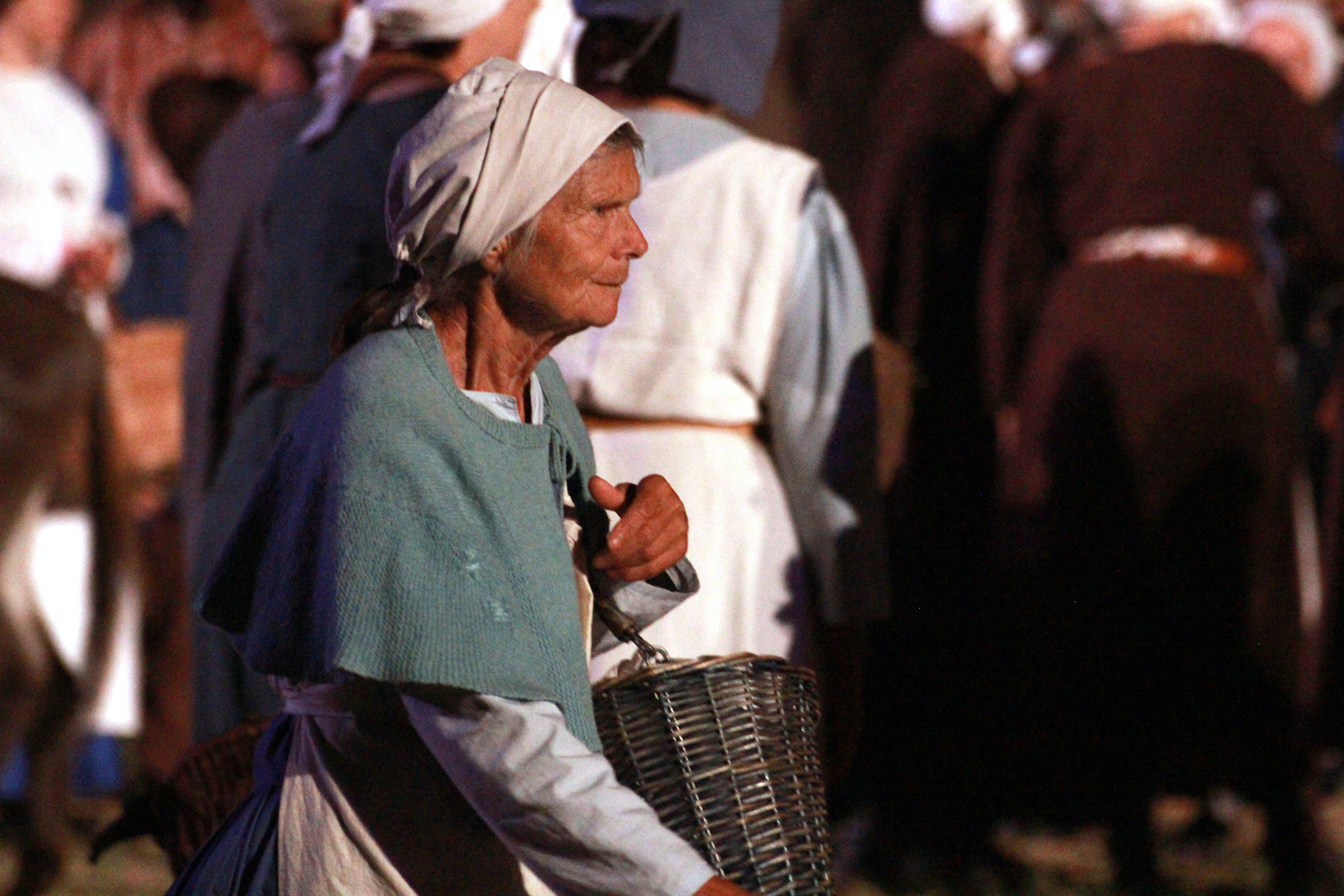 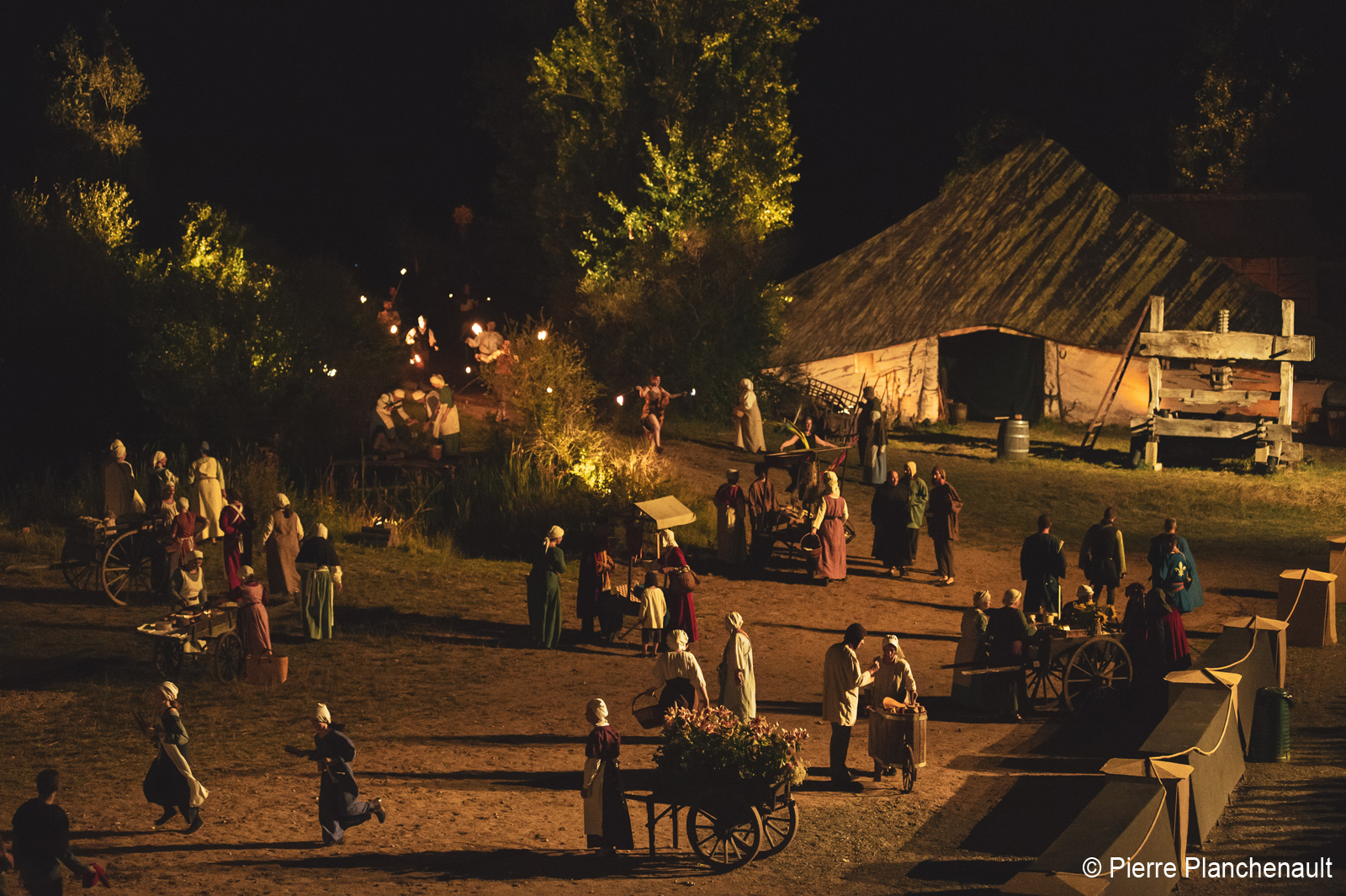 Before the start of the show dates for the summer season, meet on July 17 to commemorate the day of the Battle of Castillon. The March of Talbot takes place from Libourne to launch the historic season. The Castillon 1453 teams will be present!

The show is not intended to be a faithful and perfect reconstruction of the facts, it is above all a playful, educational moment inspired with veracity by an era. But let's not forget that the narration, the scripting sometimes takes precedence, to make everything understandable. The important thing for the team is to transport the spectator, to make him forget that he is in the 21st century ! From the bleachers, the candle seller, the thief larceny, the flower seller, the groups of peasant women who gossip, the knights strolling proudly... We witness slices of life, of emotions, we listen to the acrobats, we gallop to the rhythm of the hammering of the horses' hooves! 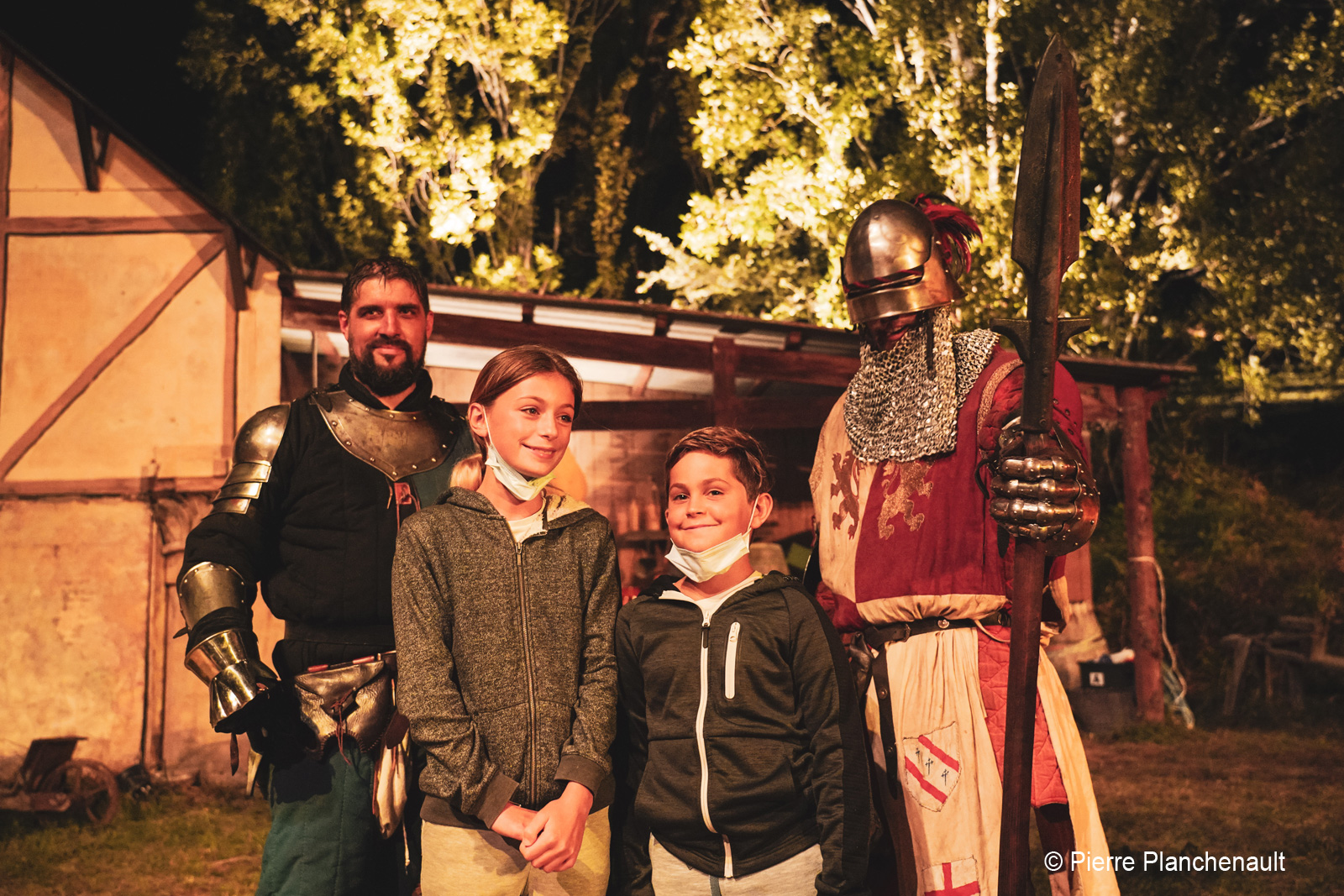 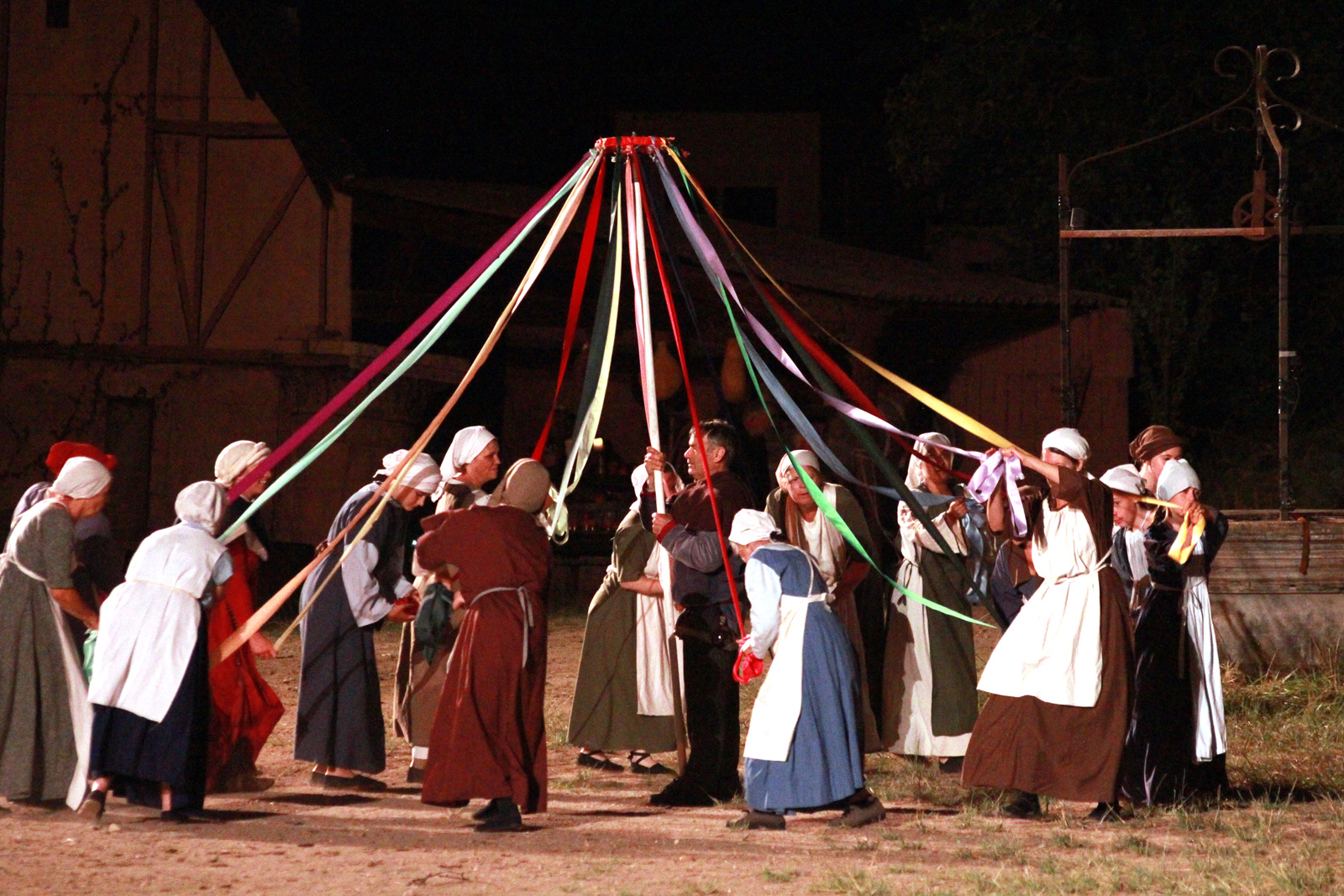 The show of La Bataille de Castillon is committed to an eco-responsible approach, a desire to make this moment as ecological as possible. LEDs are used for the show, a label is in the process of being obtained and vegetarian alternatives are offered in the catering area.

Don't wait any longer, book your tickets for one of the performances of La Bataille de Castillon on sunny days !

Back to "Party Time"

I invite you to spend a stay in Rouffignac-Saint-Cernin , common height, well located between Périgueux ...