Easy family mountain bike ride along the Coly, from Condat-sur-Vézère

Let's go for a hike to do on foot or by mountain bike, in all seasons! It is a family circuit, rather easy with some uneven without difficulty and since it is a linear circuit, you can turn around as soon as you feel tired. We will discover the very pretty village of Condat-sur-Vézère, where the confluence between the Vézère and the Coly is located, with a pretty waterfall. It is a village which is the host of a former commandery of the Hospitallers, one sees very beautiful houses there. We then continue on the forest paths along the Coly and cross different types of landscapes, until reaching the town of Coly-Saint-Amand where the source of the turquoise stream is revealed.
Photos of the article: © Guide du Périgord

Consult the hike sheet, on the website of the Vézère Périgord Noir Tourist Office (fr)

The Coly and its many small waterfalls that sing

The Coly, a tributary of the Vézère, with a mysterious siphon

The Coly is a stream in the Périgord Noir, which seems to have nothing in particular. Yet he is known around the world (cavers) for his siphon! Indeed, at the place where its resurgence is located (that is to say the place where it comes out of the earth to begin its flow in the open air, towards the Vézère), the natural submerged siphon makes almost 6 km (long, not deep). It is the longest in Europe and one of the 5 longest natural siphons in the world. None of that! Nicolas Hulot, at the time of the Ushuaia show, had also practiced diving from the source (which is in La Cassagne, you can see it from the road but it is on private land, be careful). If you are interested in the subject here is the link to an article from 1998 where a diver went up to 4250m (in length) in the Coly (fr) during a 15 hour performance! Here is also a video filmed during a dive in the soft of Coly (fr).

The mysterious Coly and its blue waters...

I recommend that you start the hike in Condat-sur-Vézère. You can park there easily and it is a very pretty village to discover. Condat is located at the confluence of the Coly and the Vézère, the emblematic river that winds through the Vallée de l'Homme, as far as Limeuil where it joins the Dordogne. It is a village which shelters a former Commandery of the Hospitallers, as well as a prison… Observe in passing, the building with its typical square keep, its machicolations and its very sloping roof! Right next door was the Chateau de Condat. The origins of the village go back to the 12th century, it is at this time that the Notre-Dame-et-Saint-Jean-Baptiste church, which sits in the middle of the village with its steeple wall, was built.

The Condat-sur-Vézère waterfall, where the Coly descends to the Vézère

The Dungeon of the Château de Condat-sur-Vézère, and the remains of a beautiful gate

If you want to see another pretty castle before or after the hike, continue to the exit of the village towards Aubas, to see the Château de la Fleunie. It is a very pleasant hotel restaurant! Going up in the forest towards Aubas, a magnificent point of view with an orientation table, is at the place called Escaleyrou on your right, you cannot miss it!

The complete hiking circuit is 20km round trip, you can also go beyond, continuing in the extension of the valley towards Saint-Geniès. We chose our mounts: mountain bikes. In VTC it is difficult, because a part is rather rocky and requires crampons and a few good pedal strokes. For children, you can push a few meters, nothing discouraging.

To follow the Coly, you have to take circuit N°5, which leaves from the car park in the direction of the center of the village, then switch about 4km further onto circuit N°15. Everything is very well indicated. There are many forest roads in Périgord, which are used, as in the case of this one, by residents, loggers and hunters. You are on a fairly busy passage, keep your right by bike as well as on foot, around bends.

The start of the hike, at the exit of the village

Follow the markings! The signs allow you to locate the fork in the paths. We take N°5, then N°15 today.

Sometimes you have to push, because it goes up, but never for very long

The Coly and its facilities which punctuate the walk

A hike through eclectic landscapes

What is wonderful in Périgord is that the landscapes change, influenced by the nature of the soil. The typical countryside landscapes are followed by wooded sets of pine forest type with some deciduous trees. Then you take a causse-type plot, quite arid with beautiful red soil and stockier trees, before joining the landscaped areas with oaks more typical of Périgord. We alternate between fields, truffles and forest, while following the gurgling of Coly, sometimes right next to it, sometimes below or under our wheels, when we cross a bridge.

Watch out for other walkers who share the trail! But don't forget to admire the scenery

Next to the bridge over the Coly, in the village of the same name: Coly!

It's time for us to turn around, but the path continues if you wish!


We turned around at Coly, as our little cyclists were tired. You can continue to the source of Coly in La Cassagne and even then towards Saint-Geniès or in the direction of Paulin. You are near one of the most beautiful villages in France: Saint-Amand-de-Coly, in the town of Coly Saint-Amand.

Did you like this hike? Find others thanks to our partner Cirkwi, just below this article! To read other reports in the Dordogne, visit our Guide du Périgord Blog. We also have a Guide du Périgord Facebook page, as well as an Instagram account @guideduperigord

Ride your bike and discover the city of Terrasson-Lavilledieu

Ride your bike and discover the city of Terrasson-Lavilledieu

Les Jardins de l'Imaginaire (The Gardens of the Imagination)

Les Jardins de l'Imaginaire (The Gardens of the Imagination)

The point of view of Escaleyrou culminates at the top of the cliff of the “End of the world”, overhanging Aubas ...

In Aubas, near Montignac-Lascaux, the Château de Sauveboeuf is a beautiful 17th century building. The castle is ...

Aubas is a small village in the Périgord Noir, which is located a few kilometers from Montignac-Lascaux, on the ... 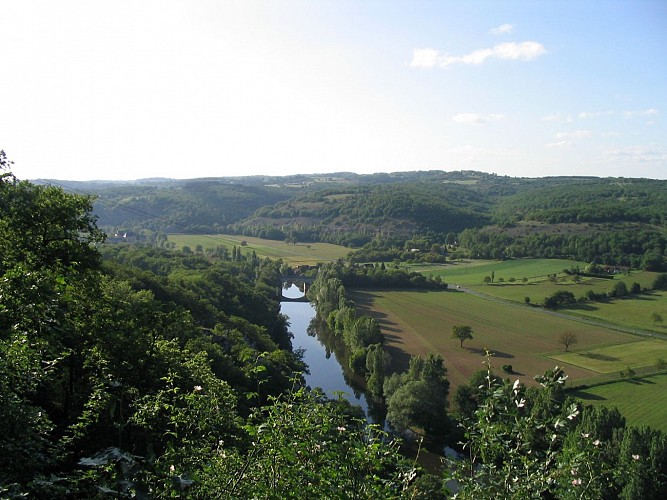