In the Dordogne Valley, the Moulin du Trel is a perfect example of the renovation of an old building and the resurrection of an exciting profession: the mill! Come and visit this old water mill from the Middle Ages, discover the secrets of making the very precious Perigord walnut oil in a 100% ecological and natural way! You will be warmly welcomed by a passionate craftsman who will explain the mechanics of the mill, its history and how it works.

Photos of the report: © Guide du Périgord or © Moulin du Trel, depending on mention

Visit of the Mill with William

Moulinier, are you sleeping? The history of the Moulin du Trel

It already appeared on Cassini's maps, the first topographical maps of France in the 18th century, but we now know that its origin dates back to the Middle Ages (12th century). The Moulin du Trel was the property of the Lords of the Château de Beynac, it is here that the precious oil (for food, but also for lighting) and the flour that made up the bread and the dishes were made, consumed at the Château.

In 2017, Pascal and Benjamin Vidal, who are artisans and manufacture foies gras, terrines, pâtés and other Périgord delicacies in jars and preserves, discover the Moulin du Trel. Seduced by the cachet of the place, they carefully renovate the building, revive the mill and diversify their activity by embarking on the traditional confection of walnut oil (and its derivatives)! What an exciting adventure!

The mill, whose walls date from the 12th century!

The coat of arms on the front door of the mill, which was used by the Vidal family to make their logo

An authentic and perfectly restored mill

The Moulin du Trel takes its name from the small stream that runs at its feet, the Treuil. As its output is low, the mill cannot operate with a classic paddle wheel that we know (like the one on pedal boats!), It is therefore equipped with a bucket wheel, which takes advantage of the force admirably. motor of the current and offers a lot of torque. This gigantic oak wheel, 4m in diameter, is actually quite small compared to the old one, the original diameter of which you will see on site… The wheel turns constantly, 24 hours a day. Do you know why? Because the water in the stream is hard, a white deposit forms on the wood, which, if the wheel is stopped too long, will harden and break, damaging the wheel! It is just stopped for maintenance or to engage the gear of the stone grinding wheel.

The craftsman who is in charge of the construction and restoration of watermill wheels is called a carpenter. It is a job that requires the mobilization of a great deal of knowledge in metallurgy, mechanics, hydraulics… No standardization of work, since each wheel is made to measure in 800 to 1200 hours of work…

The small stream Le Treuil, captured behind the mill, it fills the reach and continues its way to the Dordogne

Behind the mill, we see the canal which brings water from the reach to the wheel

The bucket wheel, with Pascal and Benjamin (his son) Vidal. © Moulin du Trel; 4 meters Circumference for this oak wheel!

The Moulin du Trel is powered 100% by the water wheel. Upstream, there is a reservoir, the reach, also built in the 12th century, by hollowing out the rock. It stores the water from the stream and serves as a buffer space should its flow ever drop. The reach also serves as a pantry! If the water does not belong to the mill (the right to water belongs to the mill, not to its user or owner), the fish are on the other hand authorized to fish and one did not deprive of it.

The stone of the grindstone, which it is inside the building, is made from a rock which consists of a conglomerate of limestone and flint, abundant in Périgord. It is hard and abrasive, perfect for crushing, grinding walnut kernels. Driven by a gear system from the bucket wheel, it is vertical (to grind flour, a horizontal grinding wheel is used). So how do we go from these mechanisms to golden and fragrant oil?

The reach that stores water to feed the mill

Behind the mill is a restored 19th century house. Right next to it, semi-troglodyte dwellings, which attest to the age of the place.

Pascal and Benjamin learned a new profession and surrounded themselves with people with quality know-how, because making walnut oil with such beautiful equipment is worth it! William welcomes you for a visit to the Moulin du Trel, he is the miller! He knows perfectly the operation, the mechanics of the mill and its history, he will know how to make you appreciate the places as much as me.

To make walnut oil, you need… nuts! The quality of the kernels is classified according to their color, from the lightest to the darkest, but as this one does not influence its taste, one can use even the kernels of color "Harlequin" (dark), perfectly delicious. The kernels come from a producer located in Sarlat (the Moulin du Trel is in the process of obtaining IGP Périgord certification). The harvest is done in autumn in Périgord, then the walnuts must be allowed to dry (because we always grind with dry, not green walnuts) and the mill then runs non-stop from the beginning of December to the beginning of April, with an average of 100 to 160 kilos of kernels treated per day (which give 50 to 80 liters of oil).

The tool with which nuts were once broken... by hand!

The mechanism is made of metal, but as you will notice the teeth of the gears are made of wood. This is not to do "as before" or to save material, it is to make the operation less noisy, to ensure the flexibility and safety of the mechanism, because if it breaks, it is the wooden teeth. that will break, not the whole mechanism!

A bit of mill jargon: It is the lantern, with its spindles, which will transmit the movement to the alluchons, which will drive the large spinning wheel, actuating the motor shaft which finally turns the 800 kilo grinding wheel!

The gear has a metal body, but the teeth are made of wood

William who demonstrates to us

The nuts were once crushed by the grannies, with a hammer and a wooden board, in the evening by the fireside. Today, it's mechanical, because you have to remove the bug and the shell to access the kernel. We keep the little skin thin. We will first spend 45 minutes crushing the kernels, then we will stop the mill (William invented an ingenious and very simple system, to easily stop the water wheel)! The dough is collected and transferred to a cast iron pan. This is my favorite operation, because this is where the smell of roasted nuts begins to emerge absolutely divine and delicious. We heat to 80 degrees for 40 minutes to help the molecules that contain the oil to break. It also increases the natural preservation of walnut oil, without any additives.

We recommend that you store walnut oil away from heat and light, ideally in the fridge door, for 1 year (if you hold on until then). It does not freeze (unlike hazelnut oil or olive oil).

The dough is transferred once more, in the press this time, which is lined with a scourtin (a fabric that filters). We push the “bonbon” and activate the press. The golden and luminous oil then flows into the bucket! Today, the press is hydraulic, we can have about 10 liters of oil at a time, but in the Middle Ages, the thumbscrew did not offer the same output (barely 4 or 5 liters).

When all the oil is extracted, the press is released and the cake is collected. It is the residue of the flesh of the nut and its skin. It is an excellent product, which contains a lot of protein for animal feed. Today, the Moulin du Trel finely sieves and enhances this product, which is in fact walnut flour! I used it to make pancakes, waffles and cakes (replacing 20% of the flour in your recipe), it's delicious...

The wheel turns, crushes the kernels, the dough obtained is transferred to a cast iron pan © Moulin du Trel

Then we prepare the press with a cloth to filter, and we operate to crush the hot dough and extract the oil by pressure © Moulin du Trel

The Moulin du Trel walnut oil is sweet, roasted and delicious in a salad or on a vegetable stir-fry, especially do not cook it, it is so good raw!

Back to "Food Lover"

The Château de Fayrac is a private château in the Périgord Noir , on the banks of the Dordogne, just outside the ...

WELCOME TO BEYNAC CASTLE THE MOST AUTHENTIC FORTIFIED CASTLE OF PÉRIGORD! Standing at the top of a vertiginous ...

It is an exceptional site, near Domme , Sarlat and Beynac . Nestled at the foot of the cliff which overhangs all its ...

The exotic garden of Roque-Gageac is an unusual place. In the heart of the Périgord Noir, the village of ... 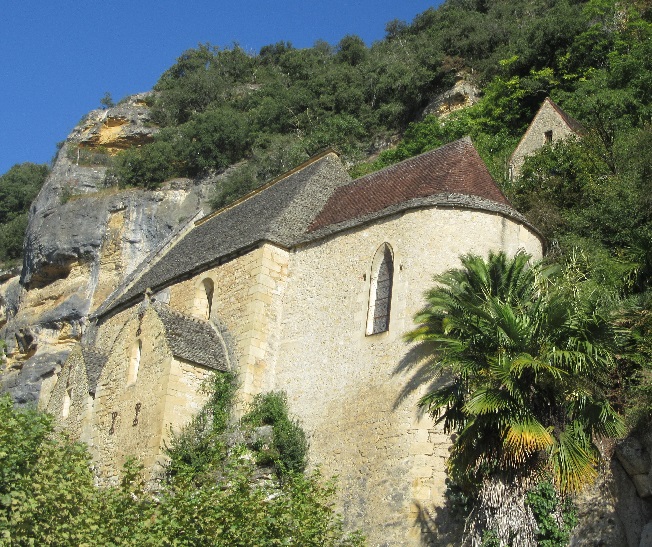